Create an account
Join the Bike for Life challenge

How the municipality of Wingene gets its personnel to cycle with Bike for Life!

Cycle to work with your hearts from 3 to 31 October during Bike for Life!

Cycle with your company, school, town or organisation with Bike for Life in favour of 'A bike for all'.  This charity action helps people on a bike even if they cannot afford to buy one. Sign up as an employer to cycle along with your employees!

Read here why the municipality of Wingene is joining Bike for Life again!

The municipality of Wingene was one of the 33 participating employers in Bike for Life 2021. General Manager Jurgen Mestdagh looks back on a successful participation of the municipal staff: "Our staff participated enthusiastically in Bike for Life. Per cycled home-work trip, one and a half euros was donated to charity. In total, 45 employees cycled 1,156 trips and together they covered just under 6,000 kilometres. That brought in 2,000 euros.”

What was the reason to participate in Bike for Life?
Jurgen Mestdagh: "I had seen the announcement in the newsletter of the VVSG and was immediately triggered by the initiative, the combination of cycling to work for a good cause. As local authority, we have been strongly committed to sustainable mobility for several years. Encouraging the municipal staff to cycle to work with a benefit campaign fits in perfectly with this."

On whose initiative did the municipality participate?
Jurgen Mestdagh: "I discussed the proposal to participate with the alderman for welfare and the alderman for sport. Given that Wingene wants to focus on healthy mobility and healthy inhabitants, they were totally in favour of our participation. The agreement about the maximum sponsorship amount that we could spend on Bike for Life went smoothly. We decided to donate the sponsor amount to Think Pink, a non-profit organisation which aims at the prevention of breast cancer. Wingene scored relatively low on breast cancer screening. By choosing this charity, we wanted to raise awareness about this.” 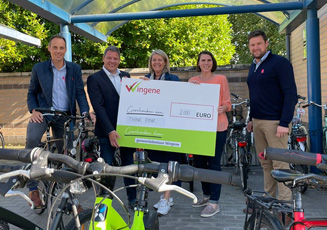 Your Bike for Life participation was a success with the staff. How do you explain that?
Jurgen Mestdagh: "Bike for Life responds to two incentives to cycle: the charity on the one hand and the competition element on the other. A good cause motivates people to make an effort, especially if it fits in with daily life such as a bike ride to work. In addition, as an employer we deliberately used the competitive element: in addition to a general target to collectively reach the maximum sponsorship amount, we gave 'sponsorship bonuses' to employees based on their mileage. Employees who cycled between 100 and 199 km earned an extra 25 euros for sponsorship, between 200 and 299 km an extra 50 euros and from 300 km employees collected an extra 75 euros for charity. This competitive element worked and created a lot of enthusiasm for cycling among colleagues."

How did you go about communicating Bike for Life?
Jurgen Mestdagh: "We started communicating about the campaign to the staff well in advance. Also during Bike for Life we often communicated via our intranet about the intermediate rankings and individual rankings of participants in terms of number of rides and kilometres travelled. At the end of the campaign, we were able to come out with great results. Our target was achieved.”

What else is the municipality doing to encourage cycling to work?
Jurgen Mestdagh: "We pay a maximum bicycle allowance to our staff. In addition, we were one of the first local authorities to start leasing bicycles for our staff as soon as this was legally possible. In cooperation with the Province of West Flanders, we have had a 'mobiscan' carried out and the 'Testkaravaan' visited us to allow our staff and residents to sample different types of bicycles."

What work points do you still see to attract even more staff to the bicycle?
Jurgen Mestdagh: "In the coming period, we want to invest in better bicycle infrastructure for our employees, such as good bicycle sheds, charging stations, showers and lockers. Our ambition is that by 2025, the number of commuting trips by bike by employees will have increased by 20%. In 2025, we want an average of 65% of staff to cycle to work at least once a year."

Are you planning to take part in Bike for Life again?
Jurgen Mestdagh: "We will definitely participate in Bike for Life again. The campaign fits perfectly with our ambitions to put cycling to work on the map among our employees. As a rural municipality with limited connections to public transport, we want to put strong emphasis on cycling in our sustainable mobility policy. Our staff is best placed to set a good example."

Bike for Life 2022 will take place from 3 to 31 October and is cycling in aid of 'A bike for everyone'. Info and registration: click here.

Bike for Life is a campaign of the Fietsersbond vzw, the advocacy organisation for cyclists in Flanders and Brussels.

Bosch eBike Systems gives Bike for Life a leg up

Cycle with your hearts from 3 to 31 October!

How the municipality of Wingene gets its personnel to cycle with Bike for Life!

Cycle to work with your hearts from 3 to 31 October during Bike for Life!